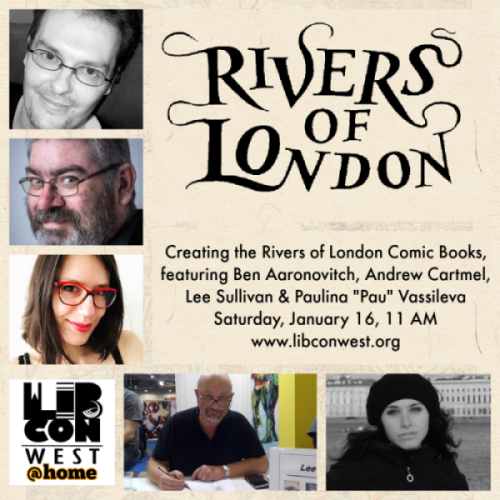 Writing novels is largely a solitary enterprise, but creating a comic book can take an entire team. Author Ben Aaronovitch collaborates with a co-author, an illustrator, and a colorist to spin off his internationally bestselling "Rivers of London" urban fantasy series into a successful run of comic books, all with original storylines. How does this team of talent work together? What are the secrets to adapting the adventures of apprentice wizard/Detective Constable Peter Grant from one format to another? Does the process ever -- like Peter's own experiments -- result in some explosions? Bring your questions to a fascinating and funny live Zoom panel featuring acclaimed author Ben Aaronovitch, co-author Andrew Cartmel, illustrator Lee Sullivan, and colorist Paulina "Pau" Vassileva. Moderated by Chantelle Aimée Osman.

You must register for this program to be sent the Zoom link.

If you are registering from outside the USA, please use a fake phone number to complete your registration (try using the "623" area code to avoid "not valid" error messages). We will only be using email addresses to send the the Zoom link. Unfortunately, our registration system does not allow us to disable the phone number as a required field. Apologies for the inconvenience!

We will also post a link to a recording of the panel here within two weeks after the live event.

If you are attending this event from a location in a different time zone from Arizona (Mountain Standard Time; UTC -7), you can click here to convert the event time to your local time.

Born and raised in London, Ben Aaronovitch had the sort of unrelentingly uninteresting childhood that drives a person to drink or science fiction. The latter proved useful in his early career when he wrote for Doctor Who (before it was fashionable), Casualty and the cheapest soap opera ever made - Jupiter Moon. Alas, his career foundered in the late 1990s and he was forced to go out and work for living. It was while running the Crime and Science Fiction sections at the Covent Garden branch of Waterstones that he conceived the notion of writing novels instead. Thus was the Rivers of London series born and when the first book - Midnight Riot - proved to be a runaway success, he waited all of five minutes to give up the day job and return to the bliss that is a full time writing career. He still lives in the city that he modestly calls "the capital of the world" and says he will leave when they pry London from his cold dead fingers. He promises that he is already hard at work on the next Peter Grant novel and not computer games - honest.

Andrew Cartmel was born in London, where he lives today. He grew up in Canada and returned to the UK to complete his education, such as it is (Andrew attended Queen Mary University and did postgraduate studies at the University of Kent in Canterbury). A lifelong desire to become a professional writer initially earned Andrew some television script commissions and resulted in him being hired as the script editor on Doctor Who, in the days when that role at the BBC was virtually the same as a show runner. He served for three seasons on Doctor Who, a highly influential run which has become memorialized as the "Cartmel Masterplan," before moving on to script edit a season of Casualty and then writing for and script editing Dark Knight at Channel Five. Other television commissions include scripts for Torchwood and Midsomer Murders. He has written novels, toured as a stand-up comedian, written plays for the stage which have been performed in London (End of the Night, Under the Eagle, and his new comedy Screwball) and also written a number of graphic novels. Andrew writes extensively about jazz for the website London Jazz News. He is currently collaborating with Ben Aaronovitch on the highly successful Rivers of London comic franchise. He is also the author of a series of crime novels about the Vinyl Detective, a jazz-loving record collector turned sleuth. (Warning: may contain cats.)

Lee Sullivan trained as a wildlife and technical illustrator at Barnfield College in Luton, then spent five years as a graphic artist for British Aerospace in Stevenage, England. He freelanced for a further five years, providing art for the advertising and magazine publishing industries; then in 1988 he started working for the comics industry. Since then, the many titles he has worked on include Transformers, Doctor Who, Marvel UK, The Amulet of Samarkand and the Rivers of London series. He has also created cover art for Roxy Music's Andy Mackay and performed with a Roxy Music tribute band.

Paulina "Pau" Vassileva is a fantasy artist and comics colourist. Based in London, Pau’s favourite themes are fantasy, the dreamy and the intriguing with a hint of ambivalence and a touch of the sensual. She has recently been colouring for Titan Comics' Rivers of London and is making two graphic novels, Fantasies of the Enchanted Window and Zvezdanka.

Chantelle Aimée Osman is the editor of Agora, an imprint of Polis Books. Agora focuses on crime fiction with unique social and cultural themes. Titles from Agora’s debut list have been nominated for Edgar, Anthony, Lefty, Macavity and Strand Critics awards, and named on multiple best-of lists for 2019 and 2020. The former Editor-in-Chief of RT Book Reviews Magazine and a freelance editor for over 10 years, she is also an instructor at the Virginia G. Piper Center for Creative Writing, Authors at Large and LitReactor. Chantelle is the author of the non-fiction series on writing The Quick and Dirty Guides To… and has also published numerous works of short fiction in addition to serving as editor for several anthologies. She was named a Publishers Weekly Rising Star honoree in 2020.

You must log in to register for this event.
Oops! - There was a problem in authenticating your card: